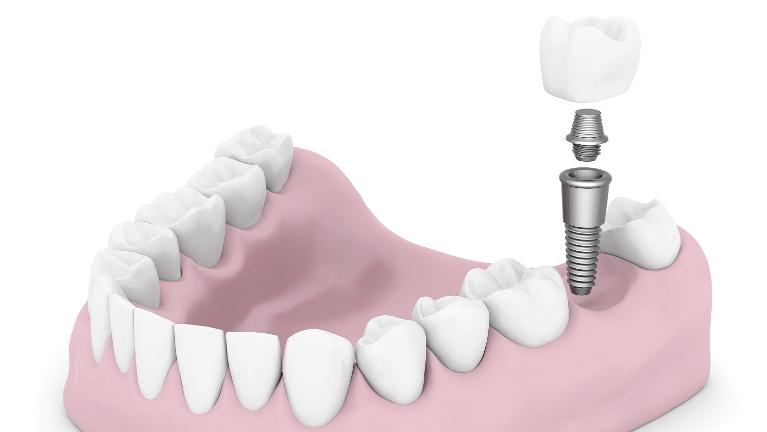 Sometimes despite everyone’s best efforts, a tooth is lost.  Maybe a cavity got so deep that the tooth could no longer be fixed predictably or perhaps it broke from trauma due to clenching and grinding.  If it is a front tooth, most people will opt for a removable partial denture at least temporarily whereas if it is a single back tooth, generally I don’t recommend a partial and space just stays there. While I do a lot of single tooth removable partial dentures, few people want those as a long term solution. For longer-term one tooth solutions often the choice is between an implant or a bridge. Another consideration is that the bridges and implants do need to be replaced, and sometimes we opt to replace implants with bridges and bridges with implants.  In this blog, I will discuss how I help my patient decide which is the correct option for them.

Bridges are the classic solution to how dentists replaced teeth before implants became a part of normal dental treatment. A bridge is done by shaving down the tooth in front of the space as well as the tooth behind the space, and then crowns are built on top both teeth and they connect together to form another tooth. They bridge the gap. While it used to be common to replace anywhere between one to four teeth with a bridge, I do not like to do bridges to replace more than one tooth because I am concerned about putting too much stress and strain on the remaining teeth.  Bridges are often done when a patient refuses to have any surgery done or cannot have any surgery done either due to medical reasons or lack of bone. Also bridges are usually better to do in the front teeth as it is easier to manage the esthetics with a bridge than with an implant. The front is also a better location for bridges because of the lower forces on the teeth compared to the back teeth.

Implants are now the more common way to replace single missing teeth. With an implant, a small incision is made along the gums and a man-made titanium tooth root is placed in the bone. This must heal for between three to six months, and after the healing, a crown is placed on top of the titanium root. During this healing period, the gap must remain because no force or trauma can happen to the bone while it is healing. Implants are wonderful first because they help more evenly distribute the forces in the mouth and they maintain bone levels as well.  Implants also are not susceptible to cavities which is the biggest reason why most teeth are lost and removed. Generally, implants in the back of the mouth are easier to do because the bone is thicker in the posterior and the esthetics while still important are not as critical.

I have also had to help restore implants and bridges that have failed.  If a bridge has failed due to a new cavity or a fracture, I usually recommend that we remove the bridge, place an implant where the missing tooth was, and restore the area with three separate crowns. This ensures that if and when anything breaks or needs to be replaced in the future then it is isolated to a single tooth keeping the costs down and making it easier to fix. If an implant has failed, generally I recommend that we redo the implant once.  If I have placed the implant in the past two years and my patient has followed all of my recommendations, I do not charge for redoing it. If it fails a second time though, I generally recommend that we do a bridge at this point. The reason is that if two implants have failed in a certain area of the mouth, the bone generally will generally not heal around a third try of the implant.  When this happens, both I and my patient are frustrated as we have spent a lot of time and energy trying to fix the space as not only have we done between two to four surgeries, but we have also waited for around one year for this all to heal. When we do the bridge, we are generally finished with it in a matter of a few weeks.

While implants are the most common way to fix single tooth problems, bridges still have their place in treatment options. Both can help restore not only your smile but your chewing capability. If you have questions about whether an implant or a bridge is the correct solution for you, call us at 504-392-5104 and we will help you out.

Related Services: Dental Implants
Return to Blog Homepage
Like us on Facebook Visit us on Yelp Watch our Youtube Videos Leave a Google Review Pin us on Pinterest
If you have difficulty using our website, please email us or call us at (504) 392-5104