> Blog > What is periodontal disease?

What is periodontal disease? 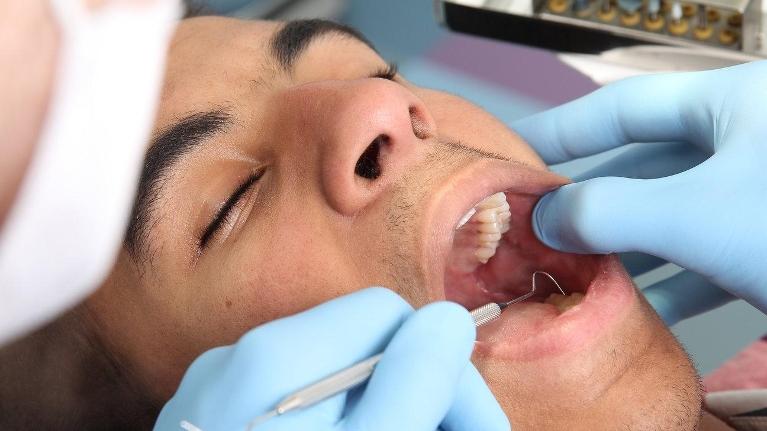 What is Periodontal Disease

Periodontal disease is when the bone and gums around the teeth have infection present and the body responds to the infection by trying to increase blood flow to the area which inflames it. Unfortunately, the body often cannot fight the infection on its own, and the bone resorbs with the hope of the infection clearing up. Signs of periodontal disease are bleeding when brushing and flossing, feeling loose teeth when chewing, and bad breath. Other signs can be the gums receding and the teeth looking longer as one ages. From a dentist’s perspective, what I see with gum disease is bleeding around the gums, bone loss on the x-rays, and often plaque built up around the teeth. I will often see the teeth starting to shift as well because as the bone breaks down, the muscles such as the tongue and cheeks and lips can move the teeth by pushing them outward.

Unlike cavities that are caused by bacteria eating sugar and producing acid which breaks down the teeth, periodontal disease has many more factors and the dental profession as a whole is not entirely sure what causes every case. The most common thing that I see in my patients with periodontal disease is that they generally do not do a good job brushing and flossing their teeth. This allows plaque to stick to the teeth and become hard, and after it hardens, flossing and brushing can no longer remove it but rather only dental cleaning instruments. This hard plaque which is also known as calculus harbors bacteria that seep into the gums but also it is often sharp and irritates the gums much like a small splinter of wood will irritate the finger. The second most common factor I see is that the patient cannot heal well either because they are a smoker or they have a compromised immune system. Smoking affects the gums because nicotine prevents the gums from getting a good blood supply. Much like grass that is not watered and given nutrients cannot survive the hot summer sun, gums without a good blood supply cannot survive the wear and tear that the mouth puts on them. Similarly, patients with autoimmune diseases such as diabetes and cannot fight off infection well will present with periodontal disease as the body is unable to mount any defense against any infections. Finally, some patients have a genetic predisposition to periodontal disease and periodontal disease can run in families. The most common reason for this is that the bacteria that is present in a parent’s mouth is transferred to the child’s mouth through kissing and sharing of utensils. If the bacteria is a virulent strain that causes bad gum disease, it is common to see it be passed down from generation to generation. The second reason is less well understood and I believe that some people have genes that make them more susceptible to gum disease. The research is not clear what the actual interaction is but there are families who have gum disease despite having normal bacteria in their mouths.

Treating periodontal disease depends much on how severe it is. The first part of treating all patients with periodontal disease is a procedure known as scaling and root planing also known as deep cleaning, and it is abbreviated as SRP. The goal of the SRP is to remove as much plaque as possible under the gums without doing any surgery as well as creating an easy environment for routine daily brushing to take care of future plaque being built up. After six weeks of doing SRP, another cleaning known as periodontal maintenance is done and the periodontal health is reevaluated. If things are healing well, generally I will recommend another cleaning be done in three to six months depending on the amount of bone loss present so that we can monitor to see how more healing is done. If healing is not good, the options are either periodontal surgery which helps locate and remove any calculus that cannot be removed from SRP or routine three-month periodontal maintenance appointments to help keep everything in as best shape as possible with SRP being done again once every three to five years as needed. By doing either the surgery or the three-month recare appointments, I can help a patient maintain their teeth for many years.

Periodontal disease, in my opinion, is more difficult to treat than cavities because it is harder to treat and harder to predict who exactly will get it. However, by doing routine things such as brushing and flossing daily as well as getting regular teeth cleanings and health check-ups from physicians, it is possible to prevent periodontal disease from ever getting a foothold in the mouth. If you are concerned about getting periodontal disease or know that you have periodontal disease but are not sure the best way to treat it, please call my office at 504-392-5104 and we will help you out.