Problems caused by clenching and grinding 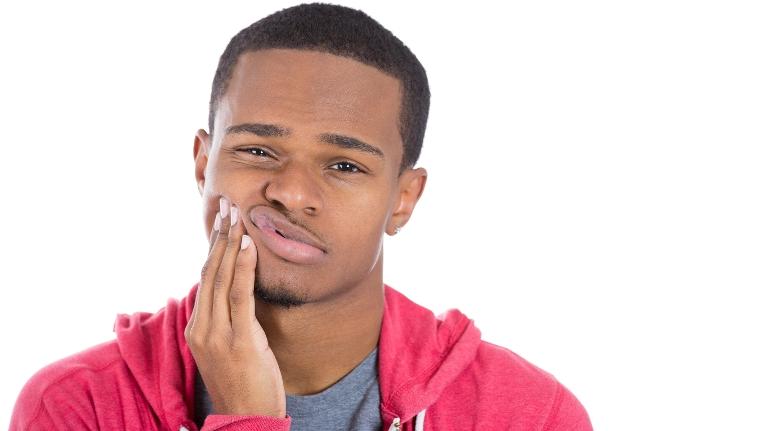 So everyone at some point in their life will likely grind their teeth and cause problems. I see it daily. I myself am guilty of grinding my teeth on a daily basis. The reasons that people grind are varied. Some grind during the day due to stress, bad ergonomics, or bad habits. Others grind during the night due to sleep apnea, poor sleep, or sometimes for no reason at all. When a person grinds though, something ends up breaking or being injured as the body gets overworked and abused. The four parts of the jaw that are affected by grinding and clenching are the joint, the muscles, the teeth, or the gums and each has different treatment needs if it is injured.

If a patient comes to me with either joint pain or muscle pain, I tend to be conservative with treatment. The best part of joint or muscle pain is that it will eventually go away for the vast majority of my patients and the most common age to get pain here is between 15 to 35. Generally what I find happens is that a person will clench or grind for a couple of days and come in with a sore jaw. The first recommendation when this happens is to figure out when the person is clenching and grinding and get the activity to stop. If it is during the day, I recommend having a cell phone alarm set for every 15 minutes and have it vibrate to remind the patient to check if he or she is clenching. If it is during the night time, I recommend a nightguard being made which is will help distribute the force more evenly and sometimes reduce the amount of grinding done. For treating the pain, the first way is to massage and place a hot compress on the tender area using as much heat and pressure as the person can stand. These two activities help relax the irritated joint or muscle and help the recovery be faster. My second recommendations for treating the pain is over the counter pain medication such as Tylenol/acetaminophen and Advil/ibuprofen alternating every 3 hours for two or three days. By alternating the pain medication, a patient gets similar pain relief as a stronger narcotic without the nasty side effects that narcotics can give.

Broken Teeth Can Be Prevented

The next most common breakdown I see in my patients who grind is broken teeth. Teeth are about as hard as gold but when grinding can put forces that are strong enough to break steel. When teeth are showing signs of wear and tear from grinding and clenching the first recommendation is to wear a nightguard. The night guard will not stop the grinding and clenching but it will take the damage much like a bumper on a car will take the damage in an accident. It is much easier and cheaper to replace a nightguard than to fix a tooth. I expect most night guards to last about five years, but I have seen patients wear through them in 12 months and I’ve seen other patients who have had the same night guard for 15 years. If the tooth is showing signs of cracking or it is worn through the hard enamel and into the softer inner part of the tooth, I will recommend a crown for these teeth. The crown will replace the broken tooth structure but also help compress cracks so that they hopefully do not expand more. Also while making a tooth ready for a crown, often the dentist can grind out the cracks so that there is less chance of them propagating. The biggest issue with not fixed teeth that are broken due to grinding is that either they split and become not fixable or they grind down slowly over the years until they are no longer fixable. By placing a crown, I can ensure that the breakdown is minimized.

Gums and Bone Deteriorationg from Clenching and Grinding

The last part of the jaw to break down from clenching and grinding is the gums and bone around the teeth. The reason is that when the teeth are overloaded from stresses and forces the bone and gums have to absorb the shock. Much like how the foundation of a house can break if too much force is placed on it, so too can the bone if it has too much stress placed on it. The method of treatment depends on where the damage is done as well as how much damage is done. If the damage to the bone is minimal, sometimes a small bit of grafting to replace the lost bone or gums can be placed to repair the affected areas. If the bone loss is severe though and especially if it is coupled with gum disease, sometimes the best option is to remove the tooth in question and try to focus on fixing the other teeth. To help prevent more bone loss, I again recommend night guards for these patients. What the night guard will do is prevent one or two teeth from taking the majority of the forces and helps make the bite more evenly. Also for these cases, the night guard helps keep the teeth in the same position as an orthodontic retainer which reduces the bone and gum loss as well.

It is possible for a person to have multiple parts of the jaw-breaking down at the same time, and for those cases, I recommend following similar plans as I’ve mentioned above. One of the most important parts of treatment is figuring out when the bad habits of grinding and clenching are happening and how to prevent them. If it isn’t possible to prevent them, then plans to mitigate the damage are needed. If you think that you clench or grind your teeth or you have jaw pain, please call my office at 504-392-5104 and my staff and I will help you out.

Related Services: Night Guards
Return to Blog Homepage
Like us on FacebookVisit us on YelpWatch our Youtube VideosLeave a Google ReviewPin us on Pinterest
If you have difficulty using our website, please email us or call us at (504) 392-5104
View the ADA Accessibility Statement
Turn on ADA Views
Contact Us Today
Give Us A Call
NOLA Dentures and General Dentistry - (504) 392-5104
Send Us an Email
Expanded Details View
This Patient's Experience
Loading Testimonial...
Loading Case...